From the land of Saints and Scholars, it is without doubt that our Irish Monastic Settlements are a very important part of our heritage.  Celebrate Ireland’s Monastic past with our beautiful Irish monastic crafted candles for sale at totallyirishgifts.com. These unique candles are available as gift sets or as individual Round Tower candles. 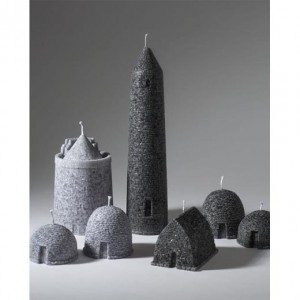 The Irish Round Tower, or Cloigtheach in Irish, was the Bell House. These towers are found throughout Ireland, principally at churches and more so at monastic sites.

Round Towers were extremely solid and well built. They range in height from 59ft to 130ft and 39ft to 59ft in circumference.  The Round Towers have slits for windows, positioned high up the tower. The roof of the Tower was made of stone in a conical shape.  The Round Tower has a door which is raised c.6-8ft above ground, accessed by a ladder.  Within the Tower there would be c.2 more floors (wooden) also accessed by a ladder.  As children we were taught that these Towers were built to with-hold Viking raids. Upon attack the Monks would gather their precious books and relics to the Tower. They raised the ladders behind them as they progressed up the Tower and so were protected against the invaders. Other ideas regarding what these Round Towers were used for include:

Round Towers were built in Ireland between the 9th and 12th centuries. Many still exist today in various states, some in ruins, some intact and good condition.

Irish Celtic Monks built beehive shaped stone huts for use as their living/sleeping areas – cells. The building technique was called ‘drystone’, i.e. no mortar was used yet they still stand strong and watertight.  One of the best examples of beehives in Ireland is at the Monastic Site on the wonderful Skellig Michael island off the coast of Kerry.  It takes an hour long boat trip to get to the Skelligs and then an ascent of 600 steps up to the Monastic Site (and of course then down again). I chickened out of a trip a few years ago that my husband and 12 year old son went on!!

On Skellig Michael you will also find a perfect example of an Oratory – a small stone church, to hold c.12 people.  Here the Monks had their daily prayer when they would read the Gospels and memorise Psalms.  Other monastic sites had larger churches, but small oratories were quite common.