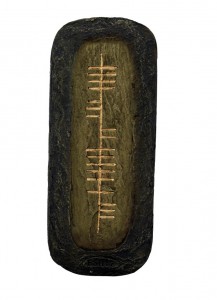 We are thrilled to have new Ogham Gifts now in stock at Totally Irish Gifts, three beautiful wall hangings can be purchased individually or as a gift set, handcrafted in Ireland from a mix of bronze and limestone, highlighted with gold leaf script.

Ogham (Oh-ehm) is the earliest version of an ancient Celtic language, used c.4th -7th century AD. Each letter of the Ogham alphabet is formed by up 5 strokes and is identified by the number, position and direction of their stroke(s), which can be angled or perpendicular across or on either side of a continuous central line. The Ogham alphabet is grouped in letters of 5, known as an aicme, each aicme is named after the first letter of that group. Ogham originally consisted of 20 letters or four aicmí, i.e. three sets of 5 consonants and 1 set of 5 vowels, this increased by 5 to 25 letters and this fifth acime, or Forfeda, was used in manuscripts.

The design of the Ogham characters allowed them to be easily carved on wood or stone and the central line represents the edge of the piece of wood/stone, this central line is called a ‘Druim’, which means ridge or spine.  Ogham inscriptions were usually just personal names on boundary markings to mark ownership, territories and graves. It is generally thought that Ogham was mostly carved on wood, which did not survive the course of time, but many examples of Ogham can still be found on Celtic ruins, boundary marks and gravestones around Ireland. Ogham was later also used in manuscripts to keep records for business and land ownership. On boundary markers, Ogham is written and read from the bottom up to the top and from left to right across the page on manuscripts. 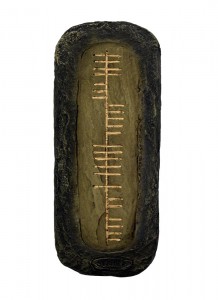 It is said that Ogham was inspired by ‘Ogma’, the God of Literature and Eloquence. It is widely believed that Ogham was used by druids, warriors and bards, as a secret language for rituals, but that the uneducated folk could not understand Ogham. Ogham may have been adapted from a type of sign language used by the druids stroking their fingers across their nose to make symbols.

It is thought the Ogham alphabet was followed by the Old Norse Rune, but certainly then by Latin, which was introduced by the Christian missionaries, who considered Ogham and Rune to be pagan.

Each of the original 20 Ogham letters is associated with a tree or plant, which were sacred to the druids.