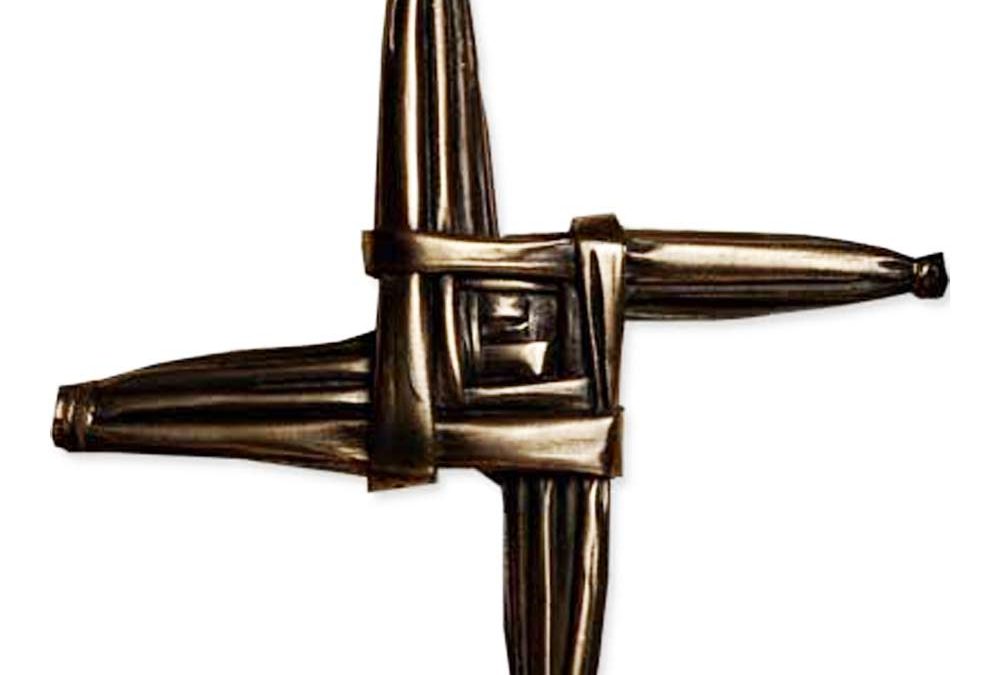 St. Brigid is the second patron saint of Ireland, famed for her love and generosity to the poor. The St Brigid’s Cross, as legend would have it, came to be when Brigid sat with a dying pagan chieftain, she began to weave rushes into a cross. Brigid used this cross to explain Jesus to the pagan chieftain, who then asked to be converted and he was baptised just before he died. The St. Brigid’s Cross is hung in homes to protect from fire and evil and is traditionally given as an Irish housewarming gift. 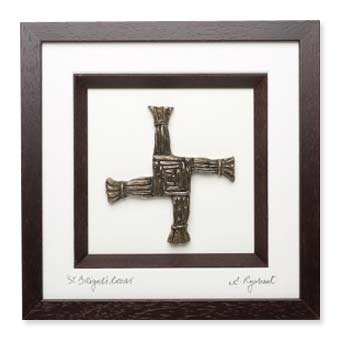 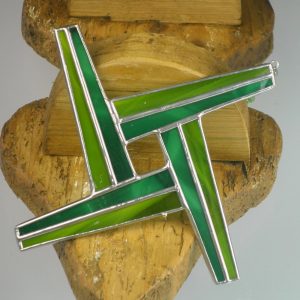 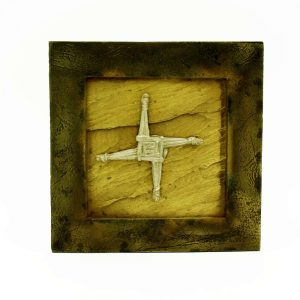 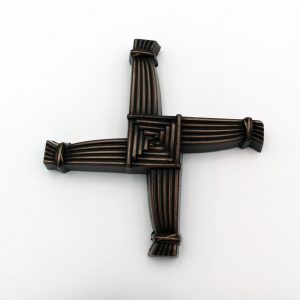 St. Brigid is the 2nd patron saint of Ireland, whose feast day is her birthday, the first day of Spring, 1st February (Lá Fhéile Bhride). Brigid is also known as Muire na nGael or Mary of the Gael which means Our Lady of the Irish.

Brid, the Celtic Goddess of Fire

But St. Brigid wasn’t the first Brid to be celebrated on 1st February.  In the Gaelic Druid religion ‘Brid’ was one of the most powerful and loved goddesses. Her feast day at the start of spring (feast of Imbolc), blessed the work of the farmers, brought fertility to the land and animals; protected the water and fishermen; and she guaranteed the fertility of women. As the Celtic goddess of fire, bonfires were lit in her honour. It was this Brid who St. Brigid was named after, but St. Brigid was to become even more revered than the goddess Brid and it is St. Brigid who is now celebrated on the 1st February.

St. Brigid was born in Faughart, Dundalk, Co. Louth in AD450.  Her father, Dubhthach, was a pagan chieftain of Leinster and her Christian mother, Broicsech, was possibly born in Portugal and kidnapped by Irish pirates and sold to Dubhthach as a slave. After Brigid was born, her mother was sold to a chieftain in Connaught and Brigid was sent to be raised and educated by the Druids.

Brigid grew into a beautiful woman and when she was old enough she returned to her father’s house as a semi-slave.  She eventually went to Connaught to find her mother and brought her home to Dubhthach’s house.

Brigid lived at the time of St. Patrick, who inspired her to convert to Christianity and she wanted to serve her life looking after the poor and the sick in the name of God. This angered her father, but Brigid was so generous in giving his wealth away to the poor, he finally conceded when she gave away his most precious jewel encrusted sword to a leper. At 18 years of age Brigid entered religious life at the convent of St. Macaille and she inspired many other young girls to join her.

St. Brigid the Abbess and the miracle of the cloak

Brigid founded many convents, the most famous of which in Kildare and she became known as Brigid of Kildare. Kildare in Irish is Cill Dara, ‘Cill’ meaning church and ‘Daire’ meaning oak tree, so Kildare means ‘Church  of the Oak’, another connection to the Goddess Brid as the oak was sacred to the Druids. In c470 she founded a double monastery for nuns and monks in Kildare and became Abbess.  The Abbey of Kildare became famous throughout Europe as Irish missionaries spread the story of the kind and generous St. Brigid.

It is said that St. Brigid went to the King of Leinster requesting land for the Abbey; she had found the perfect spot – near a forest for firewood and a lake for water and fertile land.  The King refused and Brigid prayed that he might change his mind. She asked the king ‘will you give me as much land as my cloak will cover?’  The King, looking at Brigid’s small cloak, laughed and agreed.

Brigid began to spread her cloak on the ground, four friends held a corner of the cloak and started walking north, south, east and west. The cloak grew and grew and covered acres of land.  When the King saw this he realised Brigid was indeed a holy woman and he offered her food and supplies.  The King converted to Christianity and began to help the poor.  The miracle of the cloak was the first of Brigid’s many miracles.

Brigid was requested to sit with a pagan chieftain in Kildare, who was delirious and raging on his death-bed. The Chieftain was so delirious it was impossible for Brigid to talk to him, so she just sat with and comforted him. Brigid began to weave rushes from the floor into the shape of a cross.  The Chieftain quietened as he began to notice Brigid and he asked what she was doing.  With the help of the cross Brigid explained the story of Christ and the cross.

The Chieftain was impressed with what Brigid had to say and he converted and was baptised just before he died.  From then on this cross become known as the St. Brigid’s Cross and St. Brigid used it to explain Christ to other pagans.

However, some believe this style of cross was first used by Brid, the Celtic Goddess of Fire, long before Christianity and that the cross was inspired by the pagan symbol of the sun-wheel.

Either way, the belief still holds true to this day that the St. Brigid’s cross protects a house from fire and evil.  Traditionally, a new cross is made each year on St. Brigid’s feast day, and the old one burned to ward off fire, although many homes in olden days kept all their crosses preserved in the thatched roofs, as fire would have been a huge concern for houses that had thatch and wooden roofs. 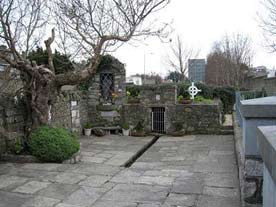 There are 15 holy wells throughout Ireland documented as being connected to St. Brigid, although there are sure to be many more undocumented.  These holy wells were established by St. Brigid to baptise pagans.  It is also believed that the water of these holy wells have curative powers, dip a rag in the water to cure eye ailments and then tie the rag to a nearby tree.  To this day people leave offerings of rosary beads and candles praying for healing.

The St. Brigid’s well pictured here is in my home town of Clondalkin in Dublin. Unfortunately the well is dry as the stream had to be diverted for road works, however, people still visit the well to pray to St. Brigid and the local school teachers nearby often bring their classes to visit the well.

St. Brigid died aged 75 in AD525 on the same day she was born, 1st February.  She was placed in a jewelled casket and buried in a tomb at the High Altar of her Abbey church.  As protection from Norse invaders her remains were exhumed in 835 and placed to rest at Downpatick with St. Patrick and St. Columcille. Although her skull was extracted and taken by three knights to the Holy land, however, they perished near Lisbon, Portugal, and St. Brigid’s skull is enshrined in a special chapel in the church at Lumier.

It is reported that a tunic belonging to St. Brigid is kept at St Donatian’s, Bruges, Belgium, and a jewelled shoe made of silver and brass is displayed at the National Museum in Dublin.

How to make a St Brigid’s Cross 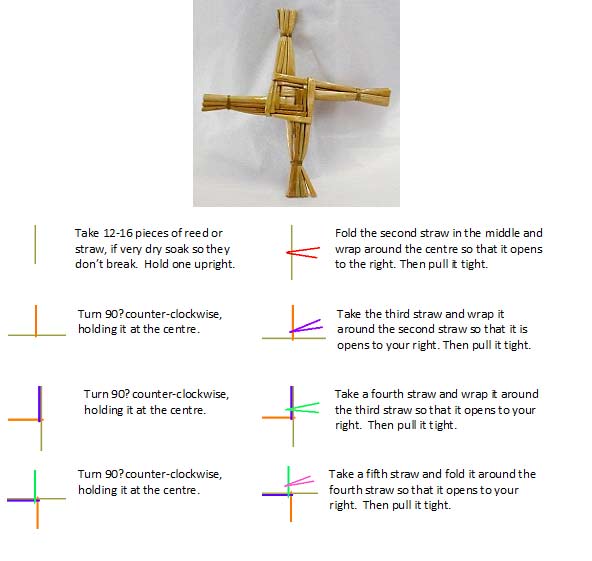 Repeat this process until all the straws are used, making sure the added straw goes to the top so it opens to your right, then turn 90◦ – just add to the right and turn to the left!  Then tie the ends of each arm of your St Brigid’s Cross with ribbon or twine.

May the mantle of your peace cover those who are troubled and anxious,
and may peace be firmly rooted in our hearts and in our world.
Inspire us to act justly and to reverence all God has made.

Brigid you were a voice for the wounded and the weary.
Strengthen what is weak within us.
Calm us into a quietness that heals and listens.
May we grow each day into greater wholeness in mind, body and spirit.

Purchase this prayer on a St. Brigid’s Greeting Card here

These pancakes are often eaten on 1st February to celebrate St. Brigid’s Day

Boxty on the griddle,
Boxty in the pan,
If you can’t make boxty,
You’ll never get your man!

Buy a gift from an Irish Store, all gifts are made in Ireland. Totally Irish Gitfts, come visit us!

Believe in us, believe in our products –  quality of Ireland.

Sign up to receive our Newsletter to keep up-to-date on special offers, products and competitions