The story of the Luck Child 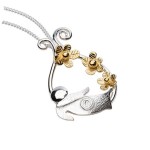 This Luck Child Pendant, handcrafted in Ireland, was inspired by the story of the Luck Child from Irish Folklore.  I had never heard this particular tale before and after some research I have summarised the story below.  It is a happy story of love and caring, which gives a very special meaning to this pendant.  The Luck Child Pendant makes a lovely gift for lots of different ocassions, but particularly for Mother’s Day, mothers on the birth of a baby or a special Christening or New Baby keepsake and would make a wonderful family heirloom.  Stocked by Totally Irish Gifts, click here for more information on this fabulous Irish gift.

The ‘Luck Child’ is a story from Celtic mythology about three cattle herders who found an abandoned baby and the loving relationship and bond they developed with the child.

These three cattle herders were in the service of King Eterscel, the High King of Ireland. Their names were Aidan, Osric and Teigue.

The three herded the King’s cattle, kept them safe from the wild animals and they lived together at the edge of the forest.

It was Teigue’s job to gather firewood and one day as he was collecting sticks he came across a baby wrapped in a cloth embroidered with golden flowers. The baby smiled at him and Teigue sat down beside the child. Osric came looking for Teigue as he was taking so long to collect the firewood. At first Osric didn’t want to know the child, but when the baby smiled at him he was smitten. Then Aidan came to see what was keeping the two. When he saw the baby wrapped in the cloth decorated with golden flowers he believed the child must be the baby of a queen and that her family would come looking for her. But Teigue believed the baby was his ‘Luck Child’, who was going to bring them great luck every day and he wanted the child to never leave them. The three agreed to keep her safe and they decided to build her a secret house in the forest.

They found the perfect safe spot in the forest and built a lovely wooden house.  Between them they nurtured the Luck Child and as the years went by their bond and love of the child grew and grew.

It seemed so quickly that this little Luck Child grew into a beautiful young woman. This made Teigue very sad because he believed the Hidden People would come and take the Luck Child away to be their queen and was afraid the three would never see her again. Osric tried to comfort Teigue and told him he would not let her be taken without a fight. Aidan said,

Do not speak of trouble or sorrow when you speak of the Luck Child. One day she will come to her own, and then she will give each of use his heart’s wish.

Teigue told the Luck Child of their wishes, she laughed and said her wish would be to have Teigue, Osric and Aidan with her always. The Luck Child played a tune on her flute for Teigue and he sat to listen. A great white hound came from the trees, it had a gold collar with crystal stones. Teigue feared the hound because he believed such a hound must belong to a king who would come looking for it. He told the Luck Child to hide quickly, but the hound would not let her leave and soon a King, Eterscel High King of Ireland, came across them. The King was mesmerised by the Luck Child’s beauty and wanted to know who she was.

Teigue told the King she was his Luck Child and that she had brought him luck every day. The King wanted to learn more of the Luck Child and Tiegue explained how he had found her wrapped in a clothl with golden flowers, how the three had brought her up and taught her well.

The Druids had promised the King good luck if he were to marry a queen of unknown lineage. He asked the Luck Child to go with him and live in his palace so that she might bring him good fortune and that she would be his Queen, the High Queen of Ireland and she would want for nothing.

King Eterscel was highly thought of and the Luck Child liked him and was happy to go with him, but she didn’t forget her friends. She asked the King if he would:

The three herdsmen were invited to live in the palace and continue to look after the Luck Child, the new High Queen of Ireland.

When the King brought the Luck Child home all his people were in awe of their beautiful new queen. The King and the Luck Child married and there was such a day of celebration. Teigue said of the sun that it had got up one hour earlier and stayed one hour later in the sky for all the happiness in the land. And the Luck Child was known as Queen Ethaun.